Virtual Drummer PHAT is a slick and funky Hip-hop operator, producing grooves, fills and breaks straight from the street!

Virtual Drummer PHAT is a slick and funky Hip-hop operator, producing grooves, fills and breaks straight from the street! Ready at any time to quickly lay down entire beats and rhythms that will make your body move and keep the MC nodding their head.

Soul and funk dominated the music biz during the 1960s and 1970s. And we think for a good reason! These styles were predominantly played by African-American musicians like Stevie Wonder, James Brown, and Marvin Gaye. Soul music took the stages, record players and musical hearts of the world by storm, driven by iconic rhythm sections like the Funk Brothers and Booker T. & The M.G.’s.

Quickly customize the sound of each of the five drum kits: Dial in some extra dirt and energy with the Grit control or by using one of our six Mix Presets – from gentle and sophisticated to fierce and powerful! 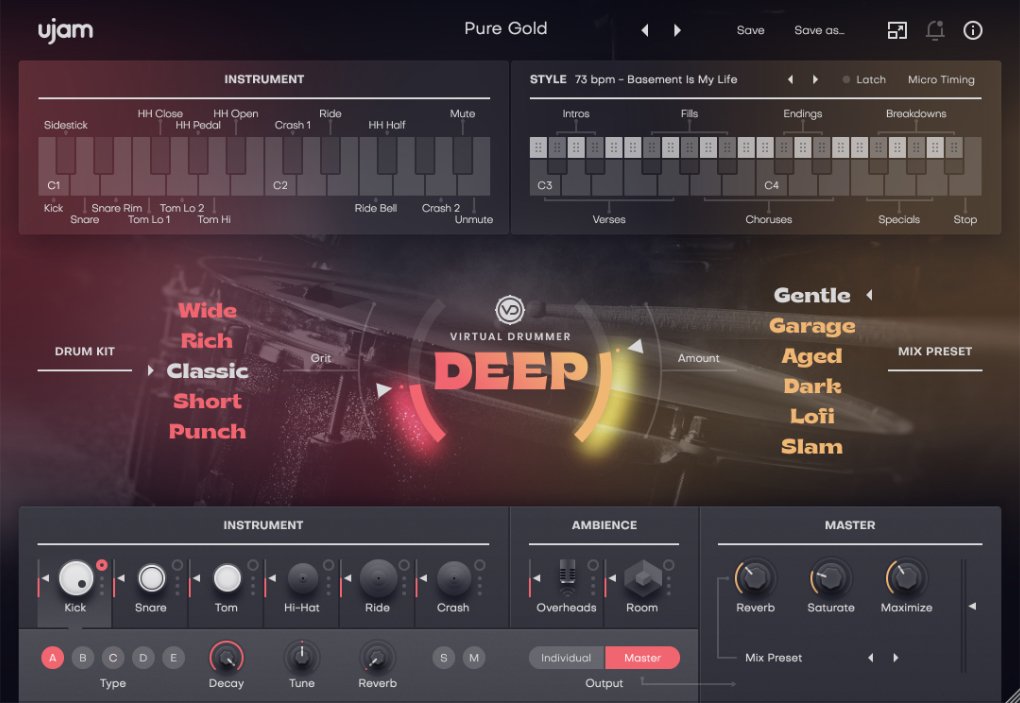 Use the Mix Presets to shape the overall sound. Each Mix Preset swaps out an entire multi-bus effect chain for every instrument channel and saves you time and nerves.

Finalize and finetune your drum mix by individually adjusting the volume of each component of the kit including separate controls for overhead & room mics before adding a touch of reverb.

The story behind our company originates from the hugely successful Steinberg Virtual Guitarist released at the Musikmesse in Frankfurt in 2002. The team behind that landmark release reunited and created UJAM with a vision to develop great sounding and easy to use audio plug-ins.

You may have success on earlier versions but UJAM doesn’t support and fully qualify them.

1280x768px Display, Internet Connection. If you want to move your .blob file to an external drive, we recommend the use of a SSD to prevent dropouts.

AU 2 version only compatible with Logic Pro X and newer.